This morning, I did something that felt wrong.

After almost two years without him, I changed the pictures on my social media accounts to those that didn’t include my son, Kane.

And then I sat and cried.

The same goes for my oldest three kids.  Yet, in different places they are stuck somewhere in the spring or summer of 2017.

JP certainly isn’t the little round-faced 9 year old in the other pictures.

(My wife, to be fair, is actually more smokin’ hot today – go figure!)

But, how fair is that?  Just because of my perceived inability to move on, they are frozen in time.  How much more ridiculous will it seem when they are in college?  Or married?

My mistake has been in confusing the difference between moving on and just moving.

I often look back at some of the messages I received in the days immediately following Kane going to heaven.  They conjure emotions of sadness, faith, joy, and hurt all at the same time.

One theme that I was likely too numb to recognize at the time was how others stand at the ready to want to make you feel better and offer sage advice on how to do just that.

My favorites are one of two things – both of which teach me a lesson on how not to respond to others.

1) Those that tell their story of grief or heartache.  As I scoured back through messages even this morning, I found many that compared what was the single worst day in my life to whatever they had gone through that related to it at all.

Here’s my reaction to that.  I care (and I do). I am sorry that you had to go through anything remotely the same (I really am).  I have no doubt that your pain equals or even exceeds what our moment felt like to us.  But in the moment, or even in the moment of looking back in reflection – I couldn’t actually want less to hear about you.

Lesson learned – make others’ problems about them, not about how you can identify with them.  That’s a blog (or a book) in and of itself.  But not today, so. .

2) Those that give the encouragement that one day it will get better and you will move on.

And that’s where a simple decision today to change pictures left me feeling like I was turning my back on my boy.  Turning and walking away from his memory.  Or just saying, “It’s time – I’m moving on.”  When I wasn’t saying or doing any of that at all.

The reason it felt so wrong, so hurtful, is that it just isn’t true.  And, figuring out the difference in what it actually IS and what it ISN’T – is monumental.

Let me announce this officially, using this blog as a historical document for the annals of time.  While I live and breathe on this Earth, until Christ returns to restore me to Him and perfection for eternity, I will never move on.

But, I will MOVE!

Moving means moving forward, carrying on, living.  God has created me for a time and place such as this – whenever now is and wherever here is.  So, to remain still invites decay and death.  I want to be used, to have purpose, and doing so means I have to be strong, faithful, and my lungs full!  If I stay in one spot, because I don’t want to move forward, then the oxygen will turn stale, my muscles will atrophy, and my message times out.

So, what moving IS, is life.

What it ISN’T, is abandoning what came before this point.  It isn’t erasing an unmovable memory.  It isn’t being disloyal.  In fact, just the opposite.  It is honoring everything prior to this exact moment that contributed to shaping who I am.

When I run, regardless if I run 2 miles or 5 miles, I always run the last 1/4 mile as fast or faster as any part of the run.  I want to finish strong.  I want to get to the last step and feel the burn in my lungs.  I certainly wouldn’t work so hard as to run 4.75 miles and then walk or crawl the last little bit.  My average time would be affected!  I want to do better than the last run!

So it is with life.  I want to run a race worthy of collapsing at the last step because I am spent.  Why would I dare stand still and not move forward, just because some of the race got tough?  I may have had to slow down, even to a crawl, but no way would I stop running.

So, while something that probably seems silly or dumb to some of you caused me moments of sadness this morning, it still gave me a reminder.

I will never move on.  I will always have Kane with me and think of him every day. 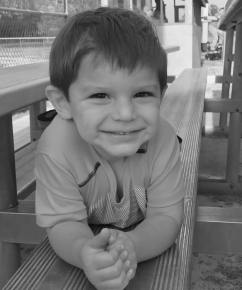 But, I will MOVE!