I’m not sure if you are aware, but there is an election in our country this year.  In fact, we are almost exactly a month away at the time I am writing this.  There are some small-town mayoral contests, a few aldermen here and there, and every two years we have to elect or re-elect the person designated for your area to the U.S. House of Representatives.  But, let’s be honest, this year is almost all about who will be the next President of the United States of America.

In the age of social media, you are likely to run across a meme that could describe your frustration with this year’s candidates. Kind of like these: 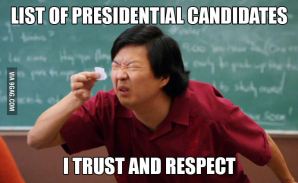 If one or more of these sums you up, it seems as if you are probably in the majority this election season.

So, now the question is – how do you choose?

The first time I was old enough to vote in a Presidential season was in what turned out to be the controversial 2000 election between Al Gore and eventual winner George W. Bush.   (I missed being age-eligible for the 1996 election by two months.)  I can remember thinking to myself, “I am casting a vote for the lesser of two evils.”  I thought George W. Bush was a nice guy, but basically riding the political coattails of his father and the financial wave of his Texas oil connections.  I though Al Gore wasn’t bright enough to actually be the President and his only actual qualification for the job was being VP to Bill Clinton for eight years.

Boy, did I underestimate that “lesser of two evils” thing.

Neither of those candidates were actually evil.  You could probably make a strong case for or against either one of them, divided amongst political rhetoric and preferences.  The worst thing you could dig up on either of them was a questionable financial supporter in their deck of backers or a laughable exaggeration about helping create the internet.  What a couple of lightweights.

Before I tell you why, let me make it clear that I know and understand the political ramifications of not voting for one of the two major party candidates.  I won’t waste the space or time to go into every detail but I know about gun rights, Supreme Court appointments, abortion, jobs, immigration, health care issues, and taxes.  I know what each candidate thinks about all of those issues and at least what they claim to be able to do about them.  I also understand (as much as one can) the Electoral College and how each vote for a third-party candidate is, in theory, “stealing” a vote from one of the major party candidates, thus helping the other major party candidate in the process.  So, just assume that I’ve weighed all of that.

So, here’s why.  We’re stuck with choosing between actual evil this time.  In my own naive way, I like to think that there is some good in everyone.  Granted, we are all born with a sinful nature (yes, even you Joel Osteen), 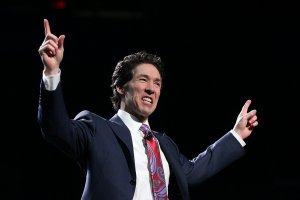 but I still actually think that there are good things in all of us.  And, I’m sure that there are some good in both Hillary Clinton (D) and Donald Trump (R).  But, I cannot be convinced that there is actual good there.  It’s not what drives them.

I bet she doesn’t say thank you to her server at a restaurant.  Chances are he won’t open doors for women.  I wonder if she hates having to smile and pretend she isn’t better than others on the campaign trail.  And he is guaranteed to use foul language in casual conversation.

These are little things, aren’t they?  But they say a lot about a person’s character.  I have no doubt that George H.W. Bush was a great tipper at restaurants, that Jimmy Carter spoke to everyone he ever met, and that Barack Obama is gracious regardless if he’s speaking to a leader of a foreign country or the guy at Starbucks.

Granted, George W. Bush was probably not the most intellectual President in our history.  Barack Obama didn’t have the strongest position on foreign policy.  Bill Clinton isn’t writing books on ethics.  Ronald Reagan didn’t set the bar for work ethic while in office.

But, I still think they’re all good people.  I can agree to disagree on policy, but still say that in no uncertain terms they are decent human beings.

Let’s take Mrs. Clinton for a moment.  I can sum it up with one thought.  Any time her lips are moving, I assume she is not being honest.  Between flip-flopping on issues depending on how it benefits her, conveniently deleting (and then forgetting she actually received) emails that may be damaging, or about the fact that she claimed to be dead broke upon leaving the White House

Now to Mr. Trump.  Is there a more despicable human being that has made it this far into national politics since Boss Tweed?  Not only does he waste more money in a month than some small countries do in a decade (while millions starve to death), but he treats other human beings like complete dirt while claiming all the while to be a Christian.  Max Lucado wrote a great article that basically sums it all up.  Go ahead, I’ll wait while you read . . . .

So, if you cast a vote for Hillary Clinton – for whatever reason – then you’re saying not only do you understand that she’s everything you say you hate about politics (lying, corruption, elitism, cronyism), but you condone it.  In fact, a vote for her basically endorses it.

And, if you cast a vote for Donald Trump – regardless of what justification you have deemed ‘worth it’ – then you’re saying that gun laws, Supreme Court justice nominations, and immigration reform all trump (pun not intended, but allowed) your sense of human decency and the ability to stand on principle.  In fact, a vote for him basically says that your moral standards do indeed have a price.

There are some decent human beings out there running under a third party ticket.  I would say the one that has the most chance of gaining votes (and is on the ballot in all fifty states) is Gary Johnson

Another candidate, and quite possibly the one that I will write-in (he’s only on the ballot in eleven states) is Evan McMullin

Maybe it’s the haircut that I dig.

I won’t go into either one of them in depth.  Do your own research.

But, I pledge to pray for him or her, regardless of who wins.  Doesn’t mean I think they are great human beings or that I will agree with their opinions and policies.  But it is what Timothy 2:2 says to do.  For eight years, many of you have dragged Barack Obama’s name through the mud instead of doing just that.  So, how bad does he look to you now?  To quote Master Chief Billy Sunday from Men of Honor, “Beware what you wish for.”

I didn’t vote for him, but he has been my President and it is my duty to lift him up in prayer.  So, I will do the same for Mr. Trump or Mrs. Clinton.

My vote won’t go to either of them, though.  Even knowing that one of them will win.

But, I will be able to sleep at night much better than if I had sold my soul to American politics.

“First of all, then, I urge that petitions, prayers, intercessions, and thanksgiving be made for everyone, for kings, and all those who are in authority. . . .”  – 1 Timothy 2:1-2(a)