This past week – I blew it!

Those of you that really know me are likely thinking, “What’s new?”  Or, “Which time?”  I tell people all the time to just follow me around for a little while and you can watch me mess something else up.

But, unless you are in the minority (or just have an inability to admit or see it when you  make a mistake), the same is true for all of us.  We say something we wish we would have worded another way.  We drop the bowl.  We miss the opportunity.  We make a snap decision that, if given more time, would have been done differently.  It’s called being a human being.

Let me tell you about my screw-up last Thursday night.  I have the privilege of being one of the coaches for the 12u All-Star baseball team here in Milan.  It’s a team of twelve kids, ranging in ages from 10-12.  Great kids and great parents.  It has been fun teaching the game of baseball and watching them compete.

They did just that  – winning one game on Tuesday and two games on Wednesday to get back to the team they lost to in a championship night on Thursday, where we would have to win two games over that team to win the title.

Like most baseball organizations (including high school baseball), Cal Ripken has a pitch-count rule in place to protect young arms against overuse.  Once we took a 4-2 lead into the bottom of the 3rd of the second game, we brought Bo in to pitch to try and close it out.  Bo had a total of 65 pitches that he could throw in that game, and as he got through the third, fourth, and fifth innings, he left 20 pitches still on the table for the last inning.

After a strikeout and a walk, Bo had 10 pitches left to throw.  I went out and talked to him – he wanted to stay in and finish, like any competitor.  We had a comfortable lead, so I wanted him to try and finish.  He struck the next batter out, then gave up a base hit.  We checked our count – 64 pitches – meaning he could throw to one more batter (the rules say that if you reach your limit of pitches during an at-bat, you can still finish the batter – even if it goes over the limit).  So, we let Bo reach back and throw strike one to the next hitter.

So, in short, my mistake of not verifying that our count and the official count matched meant that I had to witness my twelve, 10-12 year olds watch while our opponent celebrated a championship that they didn’t earn on the field.

I had blown it.

I talked to our boys and was proud of how they held their heads up, even in receiving 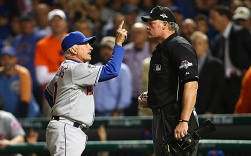 their runner-up award.  They stood and clapped as the opposing team received their championship rings.  No one yelled at the umpires, made a scene, or blamed the scorer for having a different count. The rules were followed.

Both teams advance to this week’s state tournament, so the chance for redemption exists.  But, that won’t take the sting away for sure.  When I got home and stepped out of the car, I shook my head and hated that the boys had to go through that on the account of mistakes made by adults.

I got up on Friday and got into my quiet time with God.  The result of the game was still on my mind, of course, as I read and prayed.  And that’s when I heard God’s whisper: “That’s what it’s going to feel like for a lot of people.”

I knew immediately what He was saying to me.

For all of us, there will come a day where we stand before the Father and give an account of our days on Earth.  He will look to see if your name is written in the Lamb’s Book of Life.  To see if you had that moment where you surrendered your life to Him and to His service.

Many good people will stand and say, “But, wait! That can’t be right. . ,” when He can’t find their name.  They worked hard.  They lived good lives.  They did what was asked of them.  Paid taxes.  Were good neighbors.  Went to church most Sundays.  Bought lunch for the car behind them in line.

But yet, there wasn’t a relationship with Christ.

Our boys did what they needed to for three days and went into the last inning with focus and little worry.  A seven run lead was more than plenty.  Yet, in the end the enemy celebrated.  After tough battles, the other side celebrated our demise despite having nothing to do with it.

I couldn’t let this tough situation go without at least shining the light on what’s really important.  Monday night ,when we brought it up one more time, I told our boys to remember my Kane.  One night, he was playing on a soccer field that was less than 300 yards from the baseball field we had just lost on last Thursday night.  The next morning, his clock had run out.  Using anyone’s definition, he had plenty of game left.  Plenty of time.  Little to worry about.

I hope that if you are reading this blog, you know Jesus Christ in a real and personal way.  I hope that you have a relationship with Him.  But, I also know that once your clock runs out, even if you think you have everything lined up, there won’t be an opportunity for a re-do.

While our boys get to try to make up for my mistake this week, there are still bigger and more important things they will prepare for in life.  This time, they get a chance at redemption.

There isn’t a second round of life to go through.

“Now concerning that day and hour no one knows – neither the angels in heaven, nor the Son – except the Father only.”  – Matthew 24:36

One thought on “Don’t Blow It”