Trial and error.  We are all familiar with the process.  I use it a lot when trying to be a shadow of my father anywhere around the house.  He can just fix anything.  I grew up thinking that one day, as a father (or just an adult male), I would be able to do the same.  Often, his repairs involve sheet metal, especially when missing parts are involved, or the necessity to cover a gap or hole of some sort, but that’s as much an inside family joke as anything.  Macgyver was a fun show to watch, but wasn’t my favorite.  It was like watching my dad with a mullet, except instead of two boys that had broken something looking over his shoulder, it was usually some corrupt terrorist network of guys with submachine guns.

But, back to the topic.  Trial and error.  My version of how to fix things usually involves this at some level.  If a new battery/fuse/oil filter/air filter/tank of gas won’t fix my vehicle, then someone else needs to get involved.  But, sometimes, I can get lucky and keep changing things out until something does work. . . I’m sure we are all familiar with the blind hog and the acorn, so we won’t go any deeper there.

So, what happens these days usually involves Google or YouTube or Wikipedia instead of trial and error, but there are still times when even those will only narrow our choices, instead of provide us with a concrete answer.  Most of the times this will involve trying to arrange (or re-arrange) furniture in the house, moving it into multiple different positions before settling on where you had it in the first place.

So, I’ll go ahead and get the real crux of this week’s ramblings.  I actually had only a few vague notions in what I might write about before just today, scanning through Facebook posts, etc.  (Other than my weekly posting of this site, it is rare to see a post from me. . . usually just a “like” or occasional reply to someone else.  So yes, I am just a stalker.)  Woven in amongst the multi-million dollar faux casino winnings, pictures of Flippy the elf and his messages from Santa to your soon-to-be-warped-and-further-pushed-from-the-real-and-only-true-meaning-of-Christmas kids just to try to get a couple of weeks decent behavior after not disciplining them for eleven months (too much?), and comments from all of the wonderfully talented football coaches out there who are currently waiting on their next job offer by sitting on the couch getting fatter and saying what actual coaches should have done. . . . .are often posts that mention, especially from my fb friends here in the south, some sort of “prayer request.”  Before you think I am about to attack prayer requests. . .that topic will have to wait for another day.  The one that I came across today was mentioned as a need, to which several responded that they were/are “praying.”  Later, the update provided improvement in the family member’s condition, to which the first person responded “prayers worked.”  It was that phrase that stopped my scanning in its tracks.  Now, at a passing glance, this was not only well-intended, but probably widely accepted by most, if not all, that read it.  But, upon further review, I have a question.

What if things hadn’t improved?  What, in fact, had they gotten worse?  Even to a physical death of the family member at topic?  Are we then, by saying “prayers worked” when things did go the way we had hoped, implying that they may not have “worked” had the physical status continued to the contrary?  Has faith in Christ become something of a fair-weathered event?  Let me allow you to think on those things for a moment whilst I mention my eldest son, Gabe in regards to fair-weatheredness.

We took Gabe to his first St. Louis Cardinals game when he was only four years old, I believe.  My friend Chris loaned us his season tickets in the left-centerfield bleachers and we sat in the sun for the first half of the game.  I don’t remember much about the game, but I do remember one thing – Albert Pujols hit two home runs, turning a curious four-year old into an awestruck fan in two swats of the bat. For the next couple of years, it was all about Pujols and the Cardinals.  As a lifelong Cards fan, I was happy to have him update me or ask me about the Cards and how they were doing.  We celebrated as they won the 2011 World Series, especially in Game 5 when Pujols slapped three homers in one game.

When the season ended, the Cardinals wisely (and yes, I said so at the time) decided that Albert was not worth what the Angels were willing to pay him, so he signed a 10-year contract with them for $240 million dollars.  Not only did this irk a lot of Cardinals’ fans, it sparked a little confusion in at least one 6-year old boy.  Assuming he wasn’t ready for learning how to truly be a loyal “team” man, and still just happy he loved baseball, I didn’t hammer him when he announced that he too had un-pledged his allegiance to the Cardinals, and now rooted for the Angels.  We even allowed him to get an Angels jersey as a Christmas present the following year.  He learned the names of other Angels, and seemed like a dutiful fan. . . . until this year.  In the offseason, we procured tickets to Memorial Day weekend in Kansas City.  We hadn’t been to that stadium before (by the way, very impressed with Kauffman Stadium in KC) and, as luck would have it, the hometown Royals were playing the Angels over the weekend and started a series with the Cardinals on Monday.  So we got tickets for Saturday/Monday.  Gabe would be happy, and so would we.  We were also happy to learn that tickets were much cheaper and easier to come by in KC, so we sat about 8-10 rows off the field, close enough to first base to almost spit near Pujols as he manned the position.  Good weekend, and great to just be away with the family.  To top it off, postgame on Saturday included Pujols and Josh Hamilton speaking at a crusade with the David Crowder Band on the field speaking about their faith in Christ.  (as well as Luke Hochevar, but Gabe isn’t a Vols or Royals fan, so it might as well have been the guy that waters the field.)

Fast forward to July.  The Angels were in fourth place, and Pujols was on the Disabled List, where he would stay for the remainder of the season.  It was then that Gabe announced that he was no longer an Angels’ fan, but now rooted for the Tigers.  After all, they were in first place and had reigning MVP and Triple Crown winner (look here for more on that) Miguel Cabrera.  I put my foot down.  I refused to honor his request, refused to discuss Tiger baseball with him, explained a little further about having some decency and loyalty in his life, and will only talk in general terms with him to this day, when it comes to baseball.  He does the same things in other sports, just has yet to be burned by them like the Angels did this year.  In case you’re curious – in college football he has always been an Oregon fan, in NFL it is the Broncos.

But how is Gabe’s reaction to the status quo different than our outlook sometimes, especially considering the Facebook post I referenced earlier?  We live our lives by giving credit to our own talents and intelligence.  And when we do encounter a “sticky” situation (loss of a job, sick or injured family member, death in the family, etc), we are quick to ask for prayers from others.  But, for what purpose?

This is a tough one, and I am going way outside my theological pay grade here by stepping out on a limb, but I am going to say that it has nothing to do with wanting God to have glory in our circumstances, which I believe should always be our purpose.  God is not the being that Hollywood may want you to see – the mystical spirit sitting criss-cross, applesauce on a puffy cloud waiting to throw the next lightning bolt.  (He also isn’t in the image of Morgan Freeman, eager to take a day off to watch someone else fail at being God, nor send spiritual messages to nonbelievers about building modern-day arks.)  He is the Alpha and Omega, which means. . .He’s read the end of the book already.  His Facebook page doesn’t wait until it gets 1,000,000 “likes” before He hands out another blessing.  In other words, our prayers, no matter how strong or how plentiful, do not influence the outcome.  (Told you I was playing above my ability here.)

Now, if you accept my angle on prayer, you are forced to take one of two roads (because I can’t think of a third one. . not because it isn’t possible): 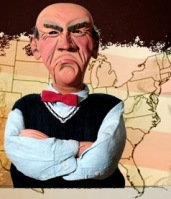 1) Do your best “Walter” (Jeff Dunham) impersonation, and fold your arms and say “ah, phooey. . . God’ll do what He wants to anyway.”  This is a real choice, and God will take you up on the offer.

2) Pray anyway.  Pray without ceasing.  Pray comforted with the knowledge that, even though God has read the end of the book, He takes great delight in watching your faith play out in flesh as you submit fully to His will.  Pray knowing that, regardless of the outcome, God is still in control and is in full position to allow us to give Him the glory in all things.

As far as our adoption is concerned, it is a constant and conscious effort in prayerfulness.  Not because I don’t think God has already chosen our next child – I’m absolutely certain that He has.  But, because I want to be faithful in acknowledging that none of the process is possible without Him, and we are fully under His authority and control.

I would ramble on, but. . .I just won’t.  I want to stop and be thankful for the privilege to talk to the God of the universe any hour of the day, any day of my life.  And, I want to be in such close contact with Him, that I will know when to pray for what, and how to pray for whom.  And. . regardless of the outcome, “prayer works.”

“Rejoice always!  Pray constantly.  Give thanks in everything, for this is God’s will for you in Christ Jesus.”  – I Thessalonians 5:16-18

One thought on “It worked?”