First off, after you finish reading this update, give me a little credit for the title’s creativity.  I won’t even ask if you have to Google part of it to figure it out.  Just your glowing adoration will be enough.

The kids love the National Treasure movies.  Despite a few bad guy run-ins, they enjoy watching Benjamin Gates and his crew solve little riddles and dodge near-misses on their way to the riches and glory.  There is a scene in the second movie where Ben (Nicholas Cage) and Abigail (his girlfriend) are arguing about Ben being arrogant about always having to be “right.”  During such, Abigail contends that he should listen to multiple arguments before making a snap decision and moving on and that when he does that and happens to be right, he just gets lucky.  Ben’s response:  “I get lucky a lot.”

I always cringe at that comment because I know my attitude can be like Ben’s sometimes.  OK, most of the time.  I don’t necessarily think that I’m right all the time like Ben, but I do want to be out in the lead, making decisions.  I don’t really have a natural leadership about me, at least in my opinion, but I just end up thinking that if I want something done right, I need to be the one that just goes ahead and does it.  Granted, my way isn’t always the best or the right way, but I can live with that better than letting someone else take control and not doing it exactly like I would.

Therein lies the problem with this adoption process.  We are spectators.  Not actively involved.  And, certainly not in on the decision-making processes as it pertains with things to do with Tiffany (the birth mother).  And that’s what’s driving us (especially me) nuts.  I don’t even like riding in an actual back seat, much less taking a back seat, but that’s where we are.  Firmly planted like a back seat driver that no one can hear.  Personally, I think God is getting a little enjoyment from watching me through this.  Of course, as I mentioned last week, learning to lean on Him is the true lesson, and it is one that Jaclyn and I are having to re-learn every day.

This past week, we got to do some more back seat sitting, while the ride took a few twists and turns.  After Tiffany had a rough time the week before, we have been praying that she continue to be comfortable not only with her decision, but with us.  We wrote her a letter of encouragement, just to tell her how many people on this end are praying for her and the baby, and how many preparations are underway in advance of his arrival.  On Wednesday, I got a phone call from our case worker for an update.  It went something like this:

Let me hit the pause button for a moment.  This is two weeks in a row that she has used the phrase “not necessarily bad.”  I haven’t told her this, but I’d be OK if I didn’t hear that phrase again for a while.  It has the affect of making you hold your breath for a few moments.  OK, moving on:

Kelly, to be honest, I like your style.  We don’t play guessing games.  Other than the phrase that I would like to avoid, straightforward is not only approved, but preferred.  She knows she has to punch you in the mouth, so she just reaches back and does it.  After a little chat with her, it turns out that there was some petty charge from months ago on Tiffany that she never showed up to court for.  So, as judges tend to do, they get tired of wondering if you’re going to show up to answer the charge.  In those cases, they go get you.  So, that’s where we are right now.  She is in jail in the Phoenix area, awaiting a court date next Friday.

So, we have still a couple of nervous points in this process.  First, that she gain state insurance.  As we mentioned before, the contract puts us on the hook for medical expenses if she doesn’t have insurance.  Second, that she continue to feel comfort about her decision to adopt and with us.  And thirdly, that financial things on our end might start to line up.  This is where I tell you about how awesome our God is.

On the first point, it has been a real worry of ours because we aren’t getting a lot of answers from Kelly about where Tiffany stands in the insurance process.  So, Friday, I called our home study agency to ask questions about how I should proceed in finding things out with Tiffany’s insurance – what is allowed, what is viewed as me pushing to far, etc.  Instead of giving me advice, she stepped up and offered to make a call on our behalf to Arizona.  An hour later, I get a text basically explaining that they have rarely had a mother that did not get on state insurance.  Additionally, if the birth mom does not do what she needs to in order to gain insurance, then simply signing an affidavit stating such takes us off the hook.  I think this would’ve been great to explain to us earlier, but the news came at a great time for us when we were really starting to be concerned about it.

On the second point, the first phone call she made once placed in custody was not to the birth father, but to her case worker in Arizona.  She checked in to tell her what had happened, and so that the agency could move in for support.  Good signs to us that she is concerned about making sure the agency is in the loop and at her side.

Finally, we come to the financial worries.  It’s so human of us to worry about money, and it drives me crazy that we do.  We look at the extra costs that come with the process, watching our savings shrink a little, and start to wring our hands a little bit at the thought.  So, our Father reached down and consoled us a little this week.  Turns out that we overpaid into our escrow account in the past year, so a refund check came in the mail yesterday from our mortgage company.  Same thing happened with our insurance company.  In. The. Same. Week.  Thank you, Father, and forgive us for needing your physical touch as confirmation that you’re still in control.

Also, continue to pray for Tiffany to make wise decisions and for the peace that she won’t be able to explain as she makes the ultimate decision in this process that I just can’t fathom – the one to willingly give your child to another family.  Pray that the peace that only God can provide gives her assurance that we are the right place for this baby boy.  And, pray for us as well – that we are patient and can handle being “hands off.”  (Hint hint – title)

Finally, we will be taking shirt orders for a few more days – through Monday.  I can’t wait to see all of the pictures of family, friends, co-workers, and even some that are just friends of friends wearing their shirts on the day the baby is born, a testament to the love that we already have for him.  So, let Jaclyn and I know if you want one soon! 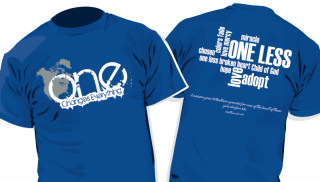 Thank you as always for your continued prayer and support!
“A man’s heart plans his way, but the LORD determines his steps.”  Proverbs 16:9