Just the other day, I was an unsuspecting eavesdropper on a conversation between two adults.  It went like this:

Lady: “So, are you still running? How many miles did you get today?”
Man: “You crazy. I’m not running.”
Lady: “I got a text from you the other day that you had run five miles!” 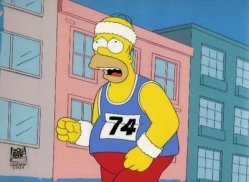 I laughed because. . .well. . it was funny.  The big guy felt good about his five minutes, but also realized he hadn’t gone anywhere.

I have felt like I’ve been running five miles some days, but check my watch to see that it’s only been five minutes.  Other days, I can look back and see how far I’ve come.  Others still, I cast a shadow on the starting line, wondering why I’m not farther around the track.

If you’re out there processing something difficult, I don’t have any words of wisdom to make it run more smoothly or a way to figure out how long the grief or the burden will last.

The only thing I’ve figured out so far is that I know nothing and control even less.

Well-meaning individuals have described dealing with a grief such as ours in a myriad different ways.

“It will be like a roller-coaster.”  Nope.  Roller coasters have a finish line.  No end in sight so far.

“You’ll have to go through all of the stages of grief.” Nah. I’ve been in all five – denial, anger, bargaining, sadness, even acceptance.  No set order and no guarantee that once I’m out of one, I won’t be back . . . again and again.

“It will get easier as time passes.” Partial truth. Most days are easier now than they were in August and September, but the flesh wounds are just as fresh some days now as they were back then.

Today’s blog isn’t really that insightful. (And, you may be thinking – no problem, par for the course.)  It’s just a statement, maybe, for someone else to read and think to themselves that what feels crazy or odd may really be normal after all.  Or, at least, whatever normal might be for now.

I read more now, looking for answers I think.  Looking for the right set of words to serve as spiritual salve, to jump start the healing.  Sometimes it’s Scripture, sometimes it’s in books.  Some words are encouraging enough to lean into, some I read picturing a writer that would have no idea how to really address the echoes of my soul.

Lamentations 5:21 says, “Lord, restore us to Yourself, so we may return; renew our days as in former times.”

Oh my.  If this prayer were really possible for me physically, I would read and pray it every day.  Every hour.  Maybe even on a continuous loop.  Return me to when I didn’t appreciate my children like I do now (yet with the reminder that I should).  Return me to when I hadn’t cried almost daily for six months.  Return me to oblivion – at least that feels like what I’m really asking.

Instead, I think the verse speaks to me differently.  I know that I cannot have the world as I knew it when I left my house on August 25th.  But, wherever I am in life, I pray that I am returned to Him.  Other versions of the Bible say it more like “turn us to You, Lord.”  The implication there is that any distance created between the Almighty and myself is not because His gaze has altered at all.  It is because of my drift, my distraction, and my lack of determination (alliteration unintended, and without seminary training – I’m convinced there’s a course there for it).

I have wallowed in pity for these six months.  Ah, you may not have noticed.  It may have looked like Jaclyn and I are strong and our faith has sustained us.  And, true enough to some degree, it has.  But, in moments of silent reflection or shared sadness, strength is not how you would describe the state of being we find ourselves in.

My calling is out there – to be the hands and feet of Christ, to be a light in the darkness, and – while I know that my eternal home awaits me (complete with a brown-skinned, smirking face to reunite with) – to hopefully share enough of the gospel to bring others with me.  My prayer matches that of Jeremiah’s – Lord, renew my days and turn me to You.  I want the rest of my days to mean something!

Then, maybe, when I say I’ve been five – it’s more than just five minutes!

“You will seek Me and find Me when you search for Me with all your heart!”
– Jeremiah 29:13