In the movie, The Green Mile, Michael Clarke Duncan plays the part of John Coffey.  John is an oversized collection of body parts, truly.  He towered over other members of the cast at 6’5″ and filled it up at 320 pounds.  His stature was intentionally a focal point by the ragged, beat-up t-shirt and the miles of denim that were put together for the overalls he wore for this role. 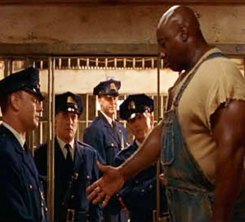 The way John Coffee appeared was a stark contrast to who he really was.  A gentle giant with a childlike heart and view of the world, John possessed the celestial ability to both see into the heart and soul of others, but sometimes even change the course of an individual by taking on their suffering as his own.

I wonder, sometimes, about the heart of others.  Would I really want to possess the ability to see, hear, and feel just what the person next to or across from me has inside them?  What would I do with that information?  Would I be bold enough and willing enough to comfort or help if they were sad or worried?  How would it change the way I approached or treated them if they were mean or filled with hate?

Sometimes, it’s not that hard.  Just like the character of “Wild Bill” in The Green Mile, some people have no problem wearing their true self out there for the world to see.  Rage, hate, and complete disregard for others is on full display, leaving no room for mystery.  Thankfully, it’s also easy to see kindness and love when played out in real life as well.

Perhaps a little cynical, I think I would be saddened or disappointed if I had John Coffey’s ability to peer into the psyche of all I encountered.  Not because of the sheer bulk of those around us that are truly evil or hateful.  Rather, I think it would just be a reflection of self-centeredness for most of our parts.  While we all think good things and some not-so-good things about others at times, I think most of our perception of others revolves around both how it affects and benefits us as individuals.  We are nice to those that are nice to us, harbor hard feelings towards those that wrong us or those that we love, and don’t give the time of day to those that have no place in our small circle or won’t benefit us in some small way.  I am as guilty as the next person of being so busy and consumed with what affects me and my family that this would define me as well – unintentional indifference.

Even more so, I find myself putting others that I feel are the strongest definitions of selfishness in a box and nailing down the lid.  I hear hateful comments, see acts of meanness, or just see the fruits that point to a tree of negativity and I’ll take that as the heart of the person and assume that’s who they will always be – instead of praying how I can shine the light in that person’s darkness.  Shame on me.

Towards the end of the movie, when it is nearing the day that John will be put to death, he is completely at peace with his fate.  In trying to reassure for those in charge of his demise, he states that the miraculous gift he has been given (to see others and be able to help where needed) has been more of a burden.  In a moment of transparency, he says, “I’m tired boss. . . . Mostly, I’m tired of people being ugly to each other. I’m tired of all the pain I feel and hear in the world everyday. There’s too much of it. It’s like pieces of glass in my head – All.  The.  Time.”

I would be lying if I didn’t feel like John sometimes.  Negativity, hatefulness, and meanness seem to be constant and at every turn.  And, I’m tired of it.  I want to tell others about how their plight doesn’t compare to mine.  I want to tell them that I would trade their temporary inconveniences for the permanent hole in my heart.

But, while I pray that my own selfish desires and ambitions are not blinders to when I can help others or see others, I get more and more weary of others who have no plans to do the same.  I agree with John when I see those that feel powerful by towering over others on the backs of unpleasantness, ego, and ugliness.

But, I’m reminded of a quote by one of the great orators and examples of Christlike love of the 20th century.  Martin Luther King said, “We must accept finite disappointment, but never lose infinite hope.”

To plagiarize him once more, I pray that the following defines me:

I’m still moving.  Which means God’s plans have not yet been perfected in me.  Show me what’s next, O Lord!