At the end of Cast Away, Chuck Noland (Tom Hanks) stops his vehicle in an intersection in the Texas panhandle and gets out to try to get his bearings.  His fiance from the first part of the movie (Helen Hunt) has remarried after Chuck had been chalked up to being lost at sea, so that wasn’t somewhere he could go.  He had delivered the only package remaining from the flight that crashed; the one that gave him hope by his refusing to open.  So he had no deliveries to make.  And, even though the movie didn’t really say so – I’m pretty sure FedEx probably told him he didn’t have any responsibilities with them for a while, maybe ever. 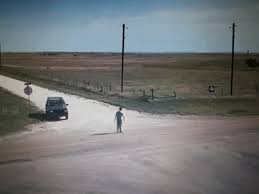 So, there he stood, looking in all directions, trying to figure out which one was best – or, presumably, if he even knew what “best” would look like anyway.  Right before the final exchange with a passing motorist, he spreads a map out on the hood of his truck, but I’m not convinced he even knew what his next move was going to be (before the passing motorist caught his attention, of course).  There he stood, a man with plenty of time and resources, yet no direction or clue on what would come next.

I’ll be honest, I intended to try to continue writing this blog on a weekly basis.  Every Sunday night seemed like a good time to post.  I opened the laptop this past Sunday and just stared at the screen.  I didn’t really have anything.  So, instead of rambling or posting just to say I posted, I shut the computer.  I figured God would provide the words when I needed them.  Or, better yet, when He intended for me to have them.

But, this directionless feeling isn’t blog-specific right now.  I feel like Chuck Noland when the passing motorist explains the options to him:

“Well, that’s (Hwy) 83 South.  And this road here will hook you up with I-40 East.  If
you turn right it’ll take you to Amarillo, Flagstaff, . . . California.  And if you head back
that direction, you’ll find a whole lotta nothing all the way to Canada.”

My thoughts are – none of that feels like it has a whole lot of meaning, unless I know what I want when I get there – wherever “there” is.

Jaclyn wrote last week about our new normal.  Perfectly summed up where we are – that we are trying to adjust to a new routine that we didn’t sign up for.  I still show up for work every day and give my very best.  Not because I’m paid to do that, but because the students and the community that I serve deserve that.  My kids show up for school every day and give their best.  Not because they love school more now than they did three weeks ago, but because it’s what you do.  And Jaclyn can be found at her desk every day, just like before, taking care of the children at the Church at Sugar Creek.  And not because she’s paid to do it, but because she knows it is what she has been called to do.

But, let me be completely transparent here – while I’m taking care of things the same as I did before August 25th, most days it’s hard putting my finger on a purpose.  Standing at an intersection looking four directions, I tell myself that I couldn’t care less what’s at the end of any of those roads.  I’ll take one of them eventually, because I have a vehicle.  But, it’s not out of drive or desire to, it’s just because I can’t just sit at this intersection for the rest of my life.

I can read this verse over and over and know that my heart has many plans.  I have plans for my marriage, my career, and plans over smaller things like the porterhouse steak sitting in my freezer.  And, I’ve made the statement countless times that I am looking forward to see what God has planned for the lives of my children.  But that always included Him using them in a mighty way on earth.

I may be resigned to say “It is Well.”  And I may have come to grips that His ways are higher than my ways.  And I hope I don’t come to the point where Job had to be scolded by God in such an embarrassing way (see Job 38-39) and be reminded of my insignificance.

I read the following quote from John Piper this week.  It sums up where I hope to get to one day.

Right now, I’m still in the first two sentences.  I’m trying to grit my teeth and get to the rest.

And I know that one day, I’ll make a drive, regardless of the direction, and be glad I did. And I might even smile somewhere along the way.  But, for now, bear with me if it looks uninspired.

“The Lord is near the brokenhearted; He saves those crushed in spirit.” –Psalm 34:18

One thought on “Road to Nowhere”